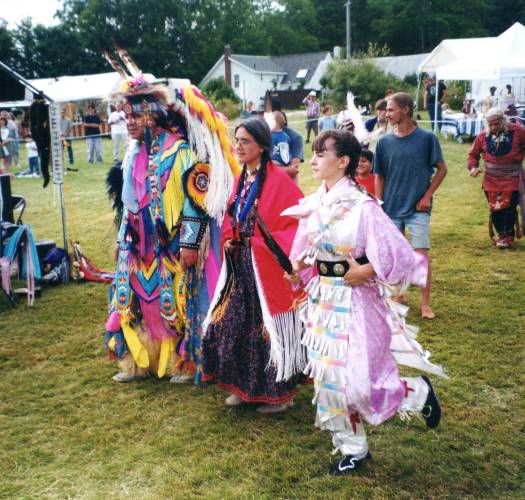 From left to right: my uncle, my mother, and a child version of me.

Do y’all remember when dictionary.com described a pow wow as “(among North American Indians) a ceremony, especially one accompanied by magic …”? If not, here’s an article from ICTMN that describes the incident: Dictionary.com: A Pow Wow Is An Event Where Indians Practice ‘Magic’

Look, I’ve danced at countless pow wows, been dancing since I could walk, and we aren’t doing magic. To me, they’re about family and good times. Similarly, the outfits we wear during pow wows aren’t costumes. They’re regalia.

Cloth, beads, buckskin: my mother makes all my regalia, an act of love and sacrifice. Mom has a genetic form of generalized dystonia; it sends painful spasms through her body. Her legs, her arms, her fingers. Thousands of beads on my crown, thousands of sacrifices she made for me. When I wear my regalia, I honor my mother, my grandmother, my great-grandmother, all the women who fought, suffered, and triumphed so I could thrive.

The glorious diatom crown! I wrote more about it here: A Mermaid’s Crown

Each time I had a growth spurt as a child, Mom made me a new jingle dress. First, I danced in blue, then turquoise, then blue, then pink, then iridescent rainbow (my personal favorite), then purple. Once I matured, Mom sewed my traditional camp dresses with ocean-themed patterns; she made me a fringed shawl lined by seashell ribbon. I wore my regalia – blue camp dress and beaded moccasins – when I graduated from Princeton. The vibrant blues hid under the black graduation robe. When the other students threw their caps into the air, I tore off my robe, as if shedding chains. 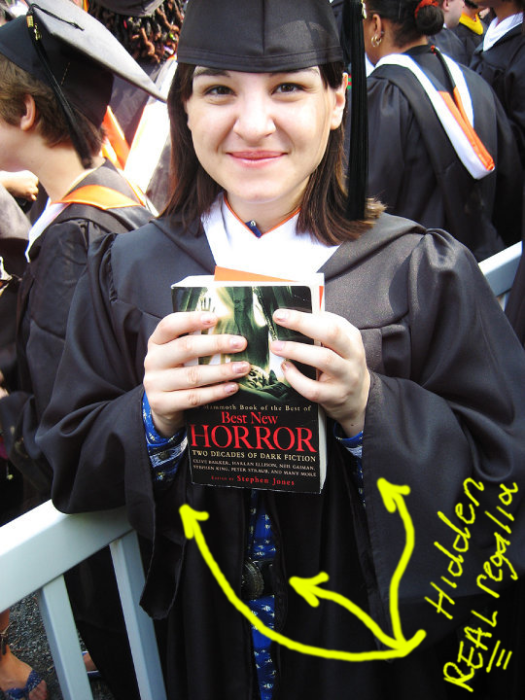 Princeton graduation (2010). Can you find my *real* regalia? Look for blue and yellow fish. Don’t ask about the horror book. 😛 I got bored. Photo by Diana Chien, my graduation buddy!

This December 1st, my short story, “Black, Their Regalia,” will appear in Fantasy Magazine’s POC Destroy Fantasy! In fact, it’s the cover story! Loooook! Destroy ahoy! “Black, Their Regalia” is about three Apache/Navajo metalheads who either save the world or die trying! As you’re reading (and you WILL read it, right? right?), keep in mind that the story *is* fantasy – The Plague Eater is my invention – but pow wows are *not* fantasy. I’M TALKING TO YOU, DICTIONARY.COM!!!!!

Oh, wow! A post! It’s been a long time – what happened? Did I meet a cursed teapot again?

Naaaah, I just finished my dissertation and moved from Texas to Connecticut. New Year’s goal accomplished, just in time for the next one.

I’m cleaning up posts this week (checking links to make sure they work, adding more images if needed, including “update” sections, etc) so some posts may be turned private until 2017. Nothing to worry about, I’m not being hacked.

Expect a few writing-related posts in the near future!